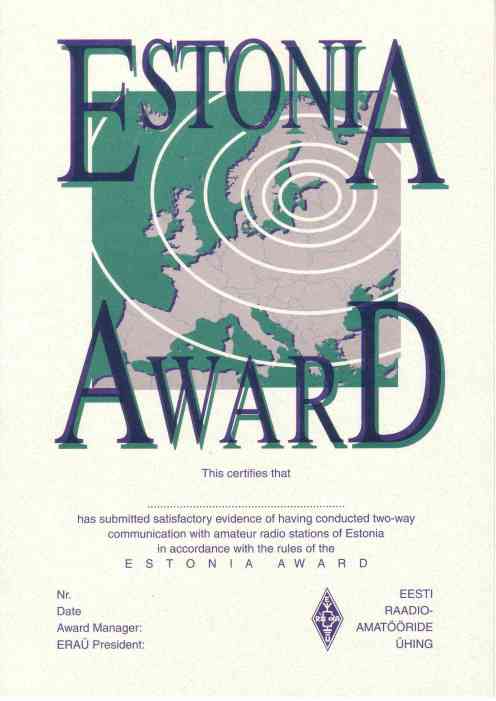 This award, instituted by the ESTONIAN RADIO AMATEURS UNION (ERAU) is available to all licensed radio amateurs and SWLs World Wide. Contacts with ES-stations are valid since Jan 1st 1990. An extract of a station log serve as the proof of the validity of the contacts. Each station may be contacted once. Stations outside of their own/home call area like ES1QD and ES1QD/0 or ES5GP and ES5GP/8 count as different ES-stations. Contacts via relay stations and/or automatic stations are not allowed.

Every QSO = 1 point. QSOs with the EARU HQ stations like ES9A to ES9Z, ES9EFF and like ES##HQ, ES#JOTA, as well as with the special event stations with any two figures in the prefix like ES60, ES75, ES80 etc. count 2 points.

A. Needed points for EUROPEAN STATIONS, all classes:

B. Needed points for STATIONS OUTSIDE OF EUROPE, all classes:

The cost of the ESTONIA AWARD is 10 USD or 10 EUR (incl. postal charges). Special awards for QSOs with 50 and 100 ES-stations are also available in all award classes. Send a request together with the extract of your log and corresponding fee to: